EDGAR, THE GOALKEEPER WHO STOPS THE MOST IN LA LIGA

The first international break of the year arrives in LaLiga Santander. After 6 games played in the 1st division, Edgar Badia and its España'82 Pro are going to the national team break, being the goalkeeper who has made the most saves so far in the competition. Edgar has made 32 saves, leading this important ranking in one of the best leagues in the world.

The second is Fernando Martinez, goalkeeper of Almería, with 28 stops; followed by Ledesma, Cádiz goalkeeper, who has 25 saves to his credit.

In addition, Edgar also leads another ranking at the start of the season, that of penalties saved, along with Remiro, Ledesma and Marchesín. These 4 goalkeepers have been the only ones capable of saving a penalty in these first 6 rounds of the league.

Great start of Edgar Badia personally at this start of the competition. We are sure that when the competition returns, Elche will achieve the good results it hopes for, helped by Edgar and his Barcelona'82 Pro. 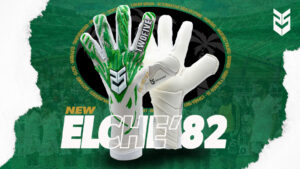