New day of football. Dueling in all national competitions and also in several international ones outside our borders with presence TwoFive. exciting day for him #TwoFiveSquad.

In key Twofive, these are the matches that will be played throughout this day by the goalkeepers of the #TwoFiveSquad:

The Elche of our goalkeepers Edgar badia y kiko box they visit Balaídos to face Celta de Vigo. Elche arrives at the duel already saved and making sure to be one more season in the first division. In front, a Celta with nothing at stake that seeks to continue climbing positions in the qualifying table.

Jose Antonio Caro placeholder image and Burgos CF they receive Cartagena at home. Match between two teams that have nothing at stake but have had an incredible season despite financial constraints compared to much of the league. Nice duel between two brave teams.

The Ponferradina of Lucho garcia visits the José Zorrilla to face Valladolid. La Ponfe still have full options to be in the promotion playoff at the end of the league, but to do so they need to beat a Valladolid that is fighting for direct promotion after its last victory against one of its direct rivals, Eibar.

Leganés, our goalkeeper's team Dani Jiménez, receives Eibar at home. The pepineros are looking for a victory that will allow them to continue climbing positions in the table and thus make up the season a bit. In front, an Eibar that needs to win to continue occupying positions of direct promotion. Exciting duel between two great squads.

The Alcorcón of Jesus Ruiz receives Las Palmas at home. The potters will be looking to win their second game in a row after steamrolling Zaragoza 0-3 in the last game. In front, Unión Deportivas Las Palmas, a firm candidate to be in the promotion playoff at the end of the competition.

The Real Sporting of our goalkeepers Diego Marino y Pichu Cuellar receives Stuani's Girona at home. Nice duel between two separate teams on the table but with clear needs. Real Sporting needs to win to move away from the relegation places, while Girona needs to win to avoid falling out of the promotion playoff places.

The Malaga of Dani Barrio He travels to the islands to measure himself against Tenerife. Complicated match between two teams fighting for different goals. Málaga needs to add three by three to leave the relegation zone behind. For their part, the people of Tenerife must win to continue with a firm step in their goal of returning to the 1st division.

The Real Oviedo of Tomeu Nadal host Zaragoza at home with the aim of staying in playoff positions and continuing to fight for the dream of being in the 1st division next season. Beautiful duel between two historic players of our football.

The Eibar of our goalkeeper Noelia garcia receives Valencia at home. Last day the relegation of the armory team to Reto Iberdrola was certified. We are sure that you will return sooner rather than later where you have to be. Cheer up girls!

New match for FC Dallas from our goalkeeper jimmy maurer and their Barcelona'82 Pro. After another great victory in the last league game, the Dallas team will face the LA Galaxy in an exciting match between third and fourth place. Great start to the season for the Texas team.

GREAT PARTY in sight with DERBI TWOFIVE. The Osasuna of our goalkeepers maitane y Silvia perez will be measured against Espanyol Montse Quesada in a vital duel between the two top favorites for promotion. The match will be played at El Sadar, one of the newest and most beautiful fields in Spain. Good luck to all three and may the best man win.

Elche of Andrea Cerda will face another vital game on Saturday to continue fighting for the goal of salvation. In front, Granada, a team in the upper part of the classification. 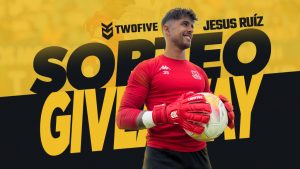