Comes to TwoFive a new venue and a new event… Let's welcome the DOHA'22 ADVANCE, a glove in honor of the past World Cup in Qatar 2022. The name of the glove honors one of the most important cities in Qatar, Doha, home to 2 venues: Stage 974 and Al Thumama Stadium . Many matches from different groups were played in Doha and great goalkeepers played in the Qatari capital, such as: E.Mendy, A.Noppert, Pickford, Courtois, Alisson, Ochoa, Szczęsny, Unai Simón, Neuer or the best goalkeeper of the tournament; The Dibu Martinez.

The World Cup in Qatar will go down in history for being a tournament in which the goalkeepers played a transcendental role in the vast majority of matches. Up to 7 goalkeepers won the award for "Man of The Match» in group matches and final phase.

In addition, one of them will go down in World Cup history for his saves, for his dances and for his skills under the sticks in penalty shootouts. We are talking about Emiliano "El Dibu" Martinez, goalkeeper for Argentina, the tournament-winning team, who was vital throughout the championship with his saved penalties and his saving grace in the last minute of extra time in the final against France.

Regarding the more technical and visual part of the new DOHA'22 ADVANCE, we find a white glove, a color reminiscent of tunics, a typical garment of the Arab world. We can also find golden touches on the back, the color of the world cup also used a lot in Arab culture.

The palm of the glove is natural latex ContactGrip maximum grip. This palm is the one used by a large part of the brand's Pro range gloves. The Doha is a lightweight model of Negative cut very comfortable. The back is composed of synthetic latex and it has good flexion points that give this model extraordinary comfort.

It's a good time to be part of the #TwoFiveSquad hand in hand with the new Doha'22 Advance. 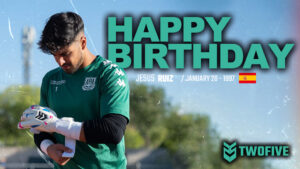